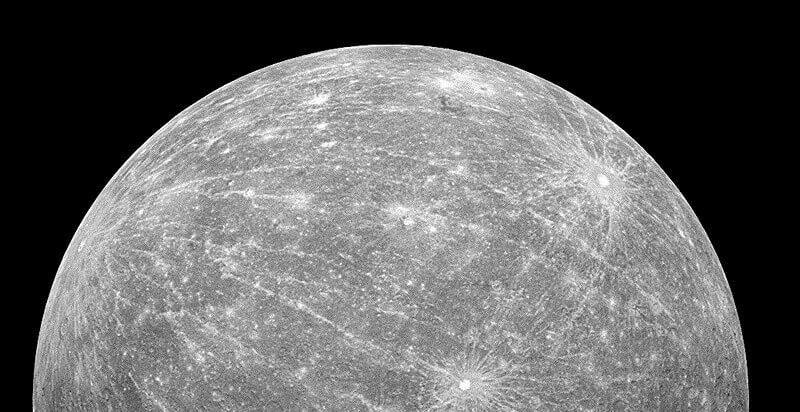 《博克体计划》投稿有现金~有人已经累计获得超过200元奖金！
释放双眼，带上耳机，听听看~！
Mercury Introduction，Mercury is the innermost and closest solar planet among the eight planets of the solar system.

Mercury is the innermost and closest solar planet among the eight planets of the solar system. It is about 0.39 astronomical units from the Sun. It is an asteroid filled with potholes. After Pluto was demoted to become a dwarf planet, it became the smallest of the eight planets. In ancient times, humans noticed the existence of Mercury, often appearing near the horizon in the early morning or when the sun just descended in the evening. So in ancient China, Mercury is also known as Morning Star (appearing in the morning) or fainting stars (appearing after dusk)

Mercury’s surface condition is similar to that of the moon. There are many concave and convex craters, but there is no “sea” structure on the moon. In addition, large cliffs are also very common. In addition to these structures, Mercury also has other relatively flat plains. It is an ancient volcanic area. The picture on the left shows a comparison of the surface of Mercury and the photo of the surface of the moon.

The terrain on the surface of Mercury shows that Mercury is hit by many meteorites after it has been formed, thus creating such a pitted appearance. The largest crater on Mercury is the “Carloris Basin”, which is about 1,300 kilometers in diameter and is one-fourth the diameter of Mercury. According to the calculation, it should be a relic that was once hit by an asteroid with a diameter of 100 kilometers.

The next two photo shows are a close-up of Mercury’s surface taken by the Mariner 10 spacecraft. It can be seen from the photo map that many sizes of potholes fill the entire surface. Another feature of the surface of Mercury is that there are cliff tops with heights and heights of several kilometers. This type of terrain is called the “wrinkle ridge”, and the longest stretch is 500 kilometers. This terrain can only be seen on Mercury.

The reason that Discovery Rupes caused this terrain may be the wrinkles caused by the rapid collapse or shrinkage of Mercury as soon as it is formed. It is estimated that Mercury will shrink by about 5% from initial formation to cooling, causing severe distortion of the surface.

For the first time, Northwestern University found photos of the surface of the surface of Mercury. The figure shows that there is a ridged ridge in the center. Through the two craters in the picture, you can imagine the process of Mercury being evaporated and squeezed. 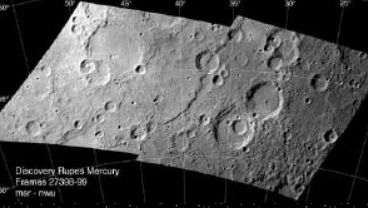 In the latest data reanalysis, it is believed that Mercury may have new volcanic activity, but further research is needed.

Mercury has a great temperature difference between day and night. It is 430 degrees Celsius during the day and 170 degrees Celsius at night. It is an environment that is very unsuitable for human direct living and the largest temperature difference among the eight major planets in the solar system. However, in recent observations, it is found that there may be ice in some places in the Antarctic and the Arctic that are never exposed to sunlight, making Mercury a planet with ice. The picture on the lower right is the structure of the ring-shaped mountain on the surface of Mercury, photographed by the Mariner 10 spacecraft. Dark shadows may have ice.

In addition, Mercury is also one of several places where humans may be immigrants in the solar system. At the poles of Mercury, there are some ring-shaped mountains. Because it is not affected by sunshine all year round, humans have the opportunity to use the ice and artificial ones. Insulation device to create a man-made immigrant environment.

Maybe you will ask, why is the temperature difference of Mercury so large? The reason is this, because Mercury is too close to the sun, so the solar radiation received in bright areas is too strong, so the temperature of the surface is greatly improved. The part that is exposed to sunlight is because Mercury has almost no atmosphere, and the heat is not easily transmitted, making this part of Mercury’s surface temperature very low, which will form such a strong contrast.

As a result of the high density of Mercury, astronomers have put forward a series of arguments, such as impact, evaporation, and huge impact. The most powerful statement is that the impact of the impact is that Mercury was hit by an early impact. The center metal core solidifies faster, and the outer rock material is blown away, thus producing such a result.

The current observations did not reveal that Mercury has satellites. Mercury is also one of the eight planets with no satellites (the other is Venus).

Humans’ exploration of Mercury was only in the 1974 Marine 10 probe, and it passed through Mercury between 1974 and 1975, until the fuel contained in it was exhausted, and many important materials and photos of Mercury were obtained. .

Even so, human understanding of Mercury is not enough, only about 45% of the surface of Mercury has been detected. In addition, humans have not been able to study in depth whether there are ice layers on the poles of Mercury.

The latest Mercury exploration program is the Messenger’s Messenger, which was launched in 2004. Relevant information can be found on the NASA website. It is expected to fly over Venus on June 5, 2007, and arrive at Mercury on March 18, 2011 to conduct an in-depth study of Mercury.

Mercury is the innermost inner planet, which means that Mercury is very close to the sun, so the elevation angle of Mercury does not exceed 15 degrees. In the evening or at sunrise, it is a good time to observe Mercury. You must choose a place with a wide field of vision and good prospects. There is no obstacle near the horizon as an observation site. You will have the opportunity to see Mercury, for example, the coast without obstacles. , or plain areas. Places such as Kenting in the coastal areas of Taiwan are good places to observe.

Mercury’s apparent diameter is very small, and the maximum is no more than 11 seconds, so it is not easy to observe the details of the surface. When using binoculars, only a slight view of its profit and loss can be seen. The use of astronomical telescopes can show clearer Mercury gains and losses.